Keep informed and in the know with our useful resources and guides.

Last week, we shared some of the work that we did earlier in the year with one of our clients, which is having a fantastic effect on improving engagement among their workforce. Since then, we have been asked if we can do some of the work with other clients and, of course, we would be delighted to be able to do that. HOWEVER, it’s worth emphasising that what works for one company may well not work for another, even if their business model, size and structure are similar – here’s an example about how using the same staff survey can result in very different actions as a result.

This company has been in business for about a decade, with a stable (steadily growing) workforce. Staff turnover is low – people tend to stay here and they’ve got used to things just ticking along. That’s great news, other than the business was sold last year following the retirement of the owner. The new MD had big plans – starting with shaking things up a bit and making everything more streamlined and professional. There was concern among staff and the new boss didn’t like the time that people were spending ‘moaning about stuff – why can’t they stop being negative?’ Knowing that the best way to take the employees with you is to involve them in decisions from the start, we encouraged the MD to start with a staff survey to find out the current situation. Our successful track record with the company meant that we were trusted to do this and then for actions to emerge as a result that would lead to meaningful change. 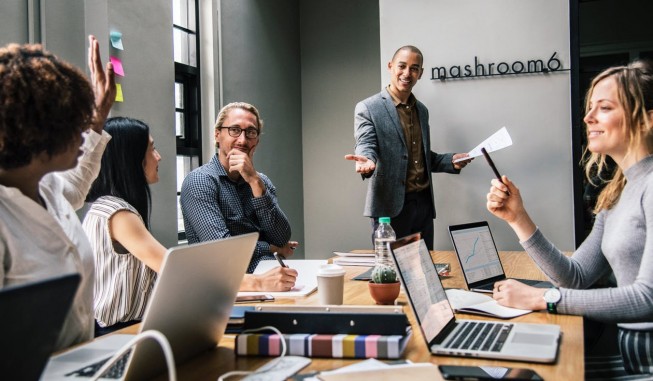 Our anonymous survey looked at various areas, including;

The results were interesting, raising questions about both leadership and internal relationships. These needed further investigation before we could advise further – so we held staff focus groups again, mixing up representatives from all workgroups in a focussed discussion about the results.

Once the discussions had taken place, it became clear that some groups of staff knew nothing about what was going on in the Company. Their plans or how their roles fitted into it – some didn’t even know who the senior team were, or that one owner had retired. Other groups knew everything that was going on, and had spent weeks worrying about the future unnecessarily, thanks to the rumour-mill and a lack of clarity from the top. There was also some evidence of unprofessional behaviours in a number of areas, particularly those where there had been a more laid back approach to management or where they had no idea what the company was trying to achieve, so didn’t realise that how their actions at work weren’t exactly in line with the company vision.

So, we set to work and have done a huge amount in just under a year – with loads still to come.  Little things were resolved easily and quickly; a lack of company t-shirts and no yellow & black tape in the warehouse made for easy solutions. These types of problems that hadn’t been addressed and had become a bigger issue than they needed to have been.  The bigger stuff took more time, but gradually we have worked inside the organisation to achieve the following:

All of this was done by using the Myers Briggs Type Indicator for people to understand their own preferences and those of other people – just knowing that everyone is different and that’s OK has proved to be absolutely key to allowing other conversations to take place, and the MBTI sessions have been a real team-building event in themselves.  We are rolling this out across the organisation and facilitating discussion around how this can be used to understand and develop teams.  People feel valuable, involved and listened to – isn’t that what we all want?

The MD is pleased that the company is no longer standing still and there is real excitement in the air about the future. The next phase will involve everyone working together to identify and agree appropriate behaviours at work with the aim of producing a ‘colleague charter’ and we also need to look at how best to meet the training and coaching needs of the team leaders. It will take time, but it’s going to be so worth it!

See – HR isn’t just about contracts and dismissals – there’s SO much more going on in the middle. I personally love the impact that we are able to make when we really get to work inside a client’s workspace, and to know that we’ve  made a real difference not only to the company success, but to everyone’s happiness at work: it’s a win:win as far as we can see!

To learn more about how we can work with you to change culture, please get in touch.  Some of our retained packages come with inclusive hours for this sort of work, or we can discuss a bespoke package that suits your needs and reflects your budget.  If you don’t have your own in-house HR or development team, then buying it in to bring about successful change really can transform what you do – let us know how we can help.

Register now for your training course for health and safety.